(For nurses who want to be nice, be friendly and be happy.)

We know that inpatient mental health wards can and do provide fantastic care to patients. We also know that they welcome any help in providing MARVELLOUS care to patients who are also described as having a learning disability.

So that’s what this website is all about – a little bit of support for you to help your patients with a learning disability.

How does it work?

We absolutely know there are a gazillion (in not a gazimillion) resources from really clever and talented people out there for you to use. We’ve included some of them and we’ll come to them later.

We felt it would be useful for you to think about a typical day on a ward, for both staff members and patients, and what sort of opportunities for MARVELLOUS care might come up.

To start with, we have some General Advice. We like to think of it as the stretching and exercising you do before taking part in sport – so we’re calling it THE WARM UP!

Buy you’re warming up to be ready for the GAME – and unlike sport, we consider it to be a game of three halves (OK, I know that’s mathematically impossible, but we’re not here to learn quantum mechanics!)

The GAME involves you and your client getting through a typical day on an inpatient ward as MARVELLOUSLY as you can. The three halves mark out the key opportunities for MARVELLOUS care during the three normal ward shifts.

THE GAME OF THREE HALVES: 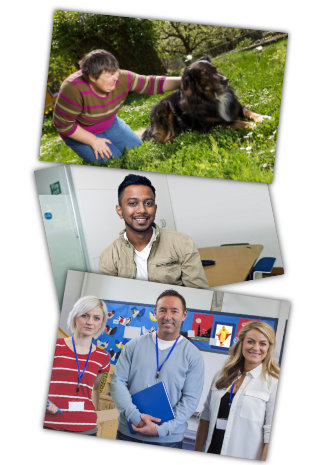 1st Half – Morning – Up and round – Getting up in the morning, preparing for the day, breakfast, planned activities, lunchtime.

2nd Half – Afternoon – Out and about – Planned activities, dinner, visiting time, relaxing into the evening.

3rd Half – Night – Settling down – Ending the day, ready for bed, and so to sleep.

Of course, after any great exertion, there’s always the time when we allow ourselves a chance to rest and recover. It’s the same with MARVELLOUS care – there’s a chance to reflect, have a post-game analysis and set down the strategies for next time. So we’re calling this THE DRESSING ROOM.

In the DRESSING ROOM you’ll find all the things you need to help both you and your patients. Unlike the WARM UP, the DRESSING ROOM is not so much about preparing you for the GAME but about recuperating and being ready for the next one.

Mary Ellen Khoo: Super-dooper nurse who worked on a mental health ward with beds for patients with learning disabilities for a number of years. Mary Ellen read and helped with the first draft.

Sarah Kennedy: Brainy and lovely Lecturer at the University of Salford. Sarah has some fab research into what education mental health nurses need to help people with learning disabilities. She took the time to read our drafts and give us brilliant suggestions for links to other resources.

You’ll see Mary Ellen’s TACTICS or top-tips scattered about like little gems and Sarah and Dave kindly chipped in some of their own as well. Together they are just wonderful.

We’d also like to say a huge “ta” to an old mate, Allan Worthington: the adorable carer champion who has allowed us to adapt (i.e. nick, filch and purloin) the “triangle of care” model for carer inclusion.

And ultimately our thanks to Nello – for inspiration, courage, fun and just plan MARVELLOUSNESS!

Inspired by the Book and Film of the Same Name

‘Marvellous’ is a book and film biopic and book about the remarkable life of Neil Baldwin. Neil is a man who has refused to accept the label of learning difficulties and created an extraordinary life for himself.

Neil has an honorary degree from Keele and has been awarded the Freedom of the City of Stoke. He is on first name terms with students and football fans/managers/players/referees, as well as vicars, bishops, archbishops, celebrities and politicians. They all call him Nello.

Neil is so remarkable that the book written about his life was also turned into a film. They’re both called ‘Marvellous’.

In proposing the award of the Freedom of the City of Stoke, Councillor Paul Breeze said about ‘Marvellous’ and Neil:

“Marvellous is a wonderful true story of a wonderful man. Neil encapsulates what should be universal ideals for humanity: be nice, be friendly and choose to be happy.”

We have unashamedly borrowed the word MARVELLOUS in tribute to Neil for his remarkable abilities.

Here are some great quotes from the film:

Medical Registrar; “We’re going to get a consultant to look at her.”  Nello; “I’d prefer if it was a doctor.”

Lou; “How do you stay so positive?”  Nello; “I’ve always wanted to be happy so I decided to be.”

Nello; “Never trust a man who doesn’t like his food.”

Nello (in a chicken mascot outfit); “I talked a young girl out of killing herself once.” Lou; “What – dressed as a chicken?” Nello; “No of course not – dressed as Father Christmas.”

(Great eh? Thanks for permission to use the word “Marvellous” from Tiger Aspect, Malcolm Clarke and of course, the great man himself – Mr Neil Baldwin.