Wardipedia – 35. Bring yourself to work day

No, this isn’t about getting a life sized cardboard cut-out photo of yourself printed and bringing it into work with you. This is about bringing the real you to work.

Bring Yourself to Work Day (Bytwd to its friends. Sounds Welsh) is, you won’t swoon with surprise to learn, an American concept. An excellent one!

It’s all about acknowledging and harnessing the enormous personal qualities and professional skills that staff have. It’s a terrible shame that not all ward staff are properly encouraged to let rip with their true humanity, intimate knowledge of Coronation Street, dazzling gospel vocals, hilarious parodies of politicians and a zillion other attributes which would enliven work and delight patients. We hope that having a Bring Yourself to Work Day will help bring out the best in the whole team. All year round.

If you are a manager, you could open up a conversation with your team about the extent to which the workplace and your culture is set up to support everyone to ‘bring themselves to work’. Do they want to? What do they think would happen if they did? What benefits do we think it would have? Are there unspoken rules about what is appropriate/not appropriate or allowed/not allowed? Are the boundaries real or imagined? Do they work for us? There may be some ‘rules’ we want to maintain, but some we could relax – maybe just as an experiment.

Have a discussion as a team about the extent to which your workplace, culture and ways of working support you and others to bring themselves to work.

The sorts of things that could be encouraged include:

There’s a brilliant list of ideas on http://www.bringyourselftowork.com/top50.htm, most of which won’t result in any disciplinary action at all. (Number 10 – wearing perfume/cologne is probably best saved for after work.)

Please click here to add your own ward example!

I was really lucky to be able to take part in Highgate Mental Health Centre’s weekly Prepare and Share group, and enthused about it at length in the Dec 2007 Star Wards’ newsletter. Here’s a flavour (see what I did there?) of how the modern matron and the ward managers shared their non-clinical skills (eg napkin-folding and pineapple carving!!) with patients. As an appetiser (sorry), here’s Jo Spencer running a hugely popular session on napkin-folding at the Star Wards’
Festival. 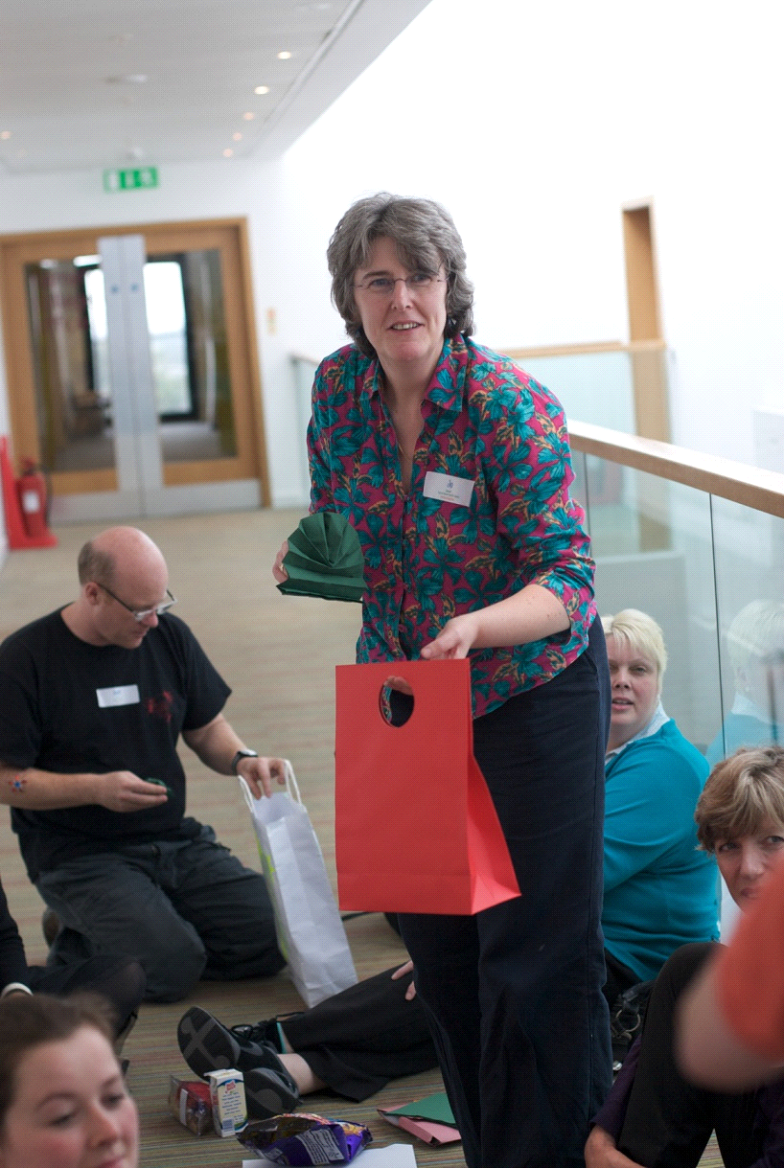 The prepare and share group is a new group incorporating a range of experiences for service users by preparing and sharing a meal together which is of a restaurant standard.It was palpably evident how much everyone was appreciating taking part. Being absorbed in meticulously preparing the veg, adding ingredients to continuously and very visibly transform the emerging ratatouille, enjoying and sometimes joining in Jo and Imran’s banter, and of course slacking off and having a nice cup of coffee. Jo wasn’t just the person who discreetly and swiftly locked the knives back up when we’d finished our task. This modern matron has two very important roles in the group. She makes the coffee and washes up. “Sometimes when we have new people here, Imran introduces me as his boss. And they just laugh!” said Jo.While Imran (who handily has chef training among his plentiful other skills) coached and co-ordinated the creation of the meal, Jo took a break from washing up and revealed yet one more skill. Decorative serviette folding. She demonstrated and then patiently encouraged us through the origamising of the serviettes, soon transformed into classy fans with their own little stand. I don’t want to boast but I do think mine was the best. Even though it looked more like an umbrella than a fan. Innovation and creativity rather than accuracy are core principles in my serviette folding philosophy.

Dishes cooked, the table was prepared. Not just a quick wipe and cutlery and plastic cups all round. A lovely tablecloth and smart glasses specially schlepped there each week. The meal was delicious, and began with samosas which had (again, inspiredly) been prepared on the ward by patients not able to take part in the cooking group itself. But the starter and main course were then totally out-classed. We watched transfixed as Imran hacked away at a pineapple, apparently randomly chopping off the woody casing. I can’t do justice in mere words to the sculptural masterpiece which astonishingly emerged.

So many hobbies, so little time

The extravagant list below only scratches the surface of human ingenuity, talent and strangeness. For example, where is the microscopic sculpting? Williard Wigan from Birmingham uses a microscope to create sculptures so tiny they can fit comfortably into the eye of a needle or a pin-head! A small hair from a dead fly becomes a paint brush. (Yes, from a fly. A dead one.) Hardly a daft hobby he apparently sold his life’s work for a cool 20 million dollars.

We hope the list will inspire people to not only bring in but share, learn and experiment their leisure enthusiasms. Well, ones that are legal in the UK. The list would appear to be American and includes some leisure interests which involve ammunition. Which makes it not a good list in its entirety to use for inspiration for activities with patients! But there’s lots of great ideas which are safe, fun and free! Star-gazing is a nice one.
Anyway…. Here’s the uncensored list!