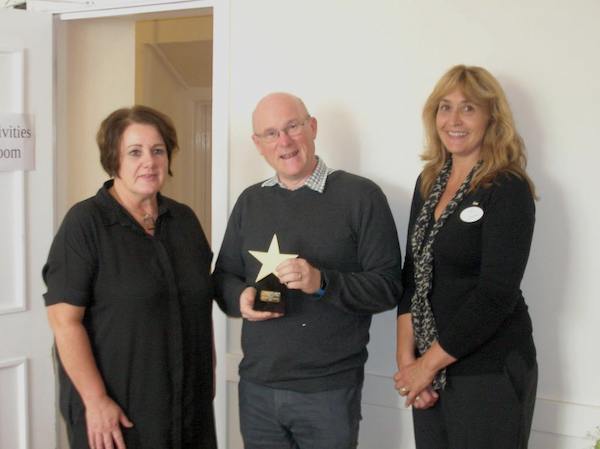 Maria was born in Italy, but came to the UK in 1955. Janet has seven great-grandchildren. Both are residents of Castle Hill care home in Bodmin, and Marie tells me that Janet was the main reason she decided to be a resident.

“When I came here with my Daughter I saw her sitting quite happily in this clean and lovely place and though that I would be happy here too.”

I met Janet and Maria while visiting Castle Hill to present them with a Full Monty. As this is the first Full Monty ever to be awarded to a Care Home, I think I should give a bit of history. Years ago we were delighted to award Monty’s to three younger adult wards in Bodmin Hospital. These wards were nominated by wonderful nurse leader, Michaela Burt. Eighteen months ago Michaela has changed tack and become manager of a care home. Being a true Star Wards person, she takes it with her and adapts it for this new environment. After a lot of hard work from all the staff at the Care Home, Michaela and her able deputy, Claire Cooper, feel they have done all that is possible within the 75 changes for the Full Monty – plus some extra stuff more fitting in a care home. She asks if we can consider the home for the award. When she tells us what they have done, we are stunned. So here I am, looking around the Home and chatting to Janet and Maria. 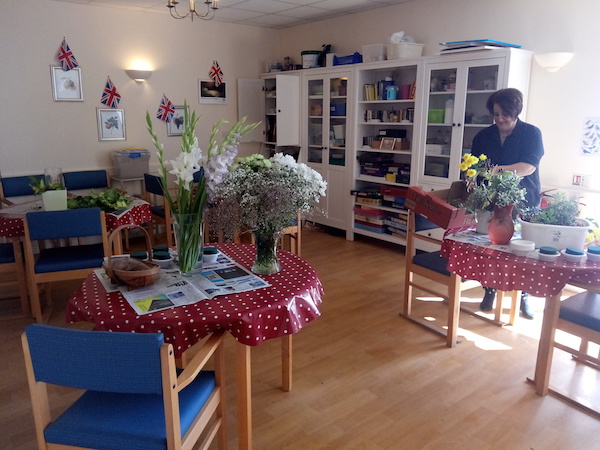 Let me tell you just how good this place is. Fresh, airy and spotless, the renovated building is pleasantly rambling and presently home to thirty-six residents. Unlike most of the other units we visit, this is a final home for people like Janet and Maria who have led full lives before coming here. So the individual bedrooms for residents are exactly that – individual. Decorated by the resident and their families in a manner which suits their personality, each one is unique. On the wall of one room is a framed letter from the Queen congratulating the resident on their hundredth birthday. She’s had it for four years. In another, a large oil panting hangs on a wall. Some are gloriously chaotic and some are as pristine and minimalist.

Outside the individual rooms, the home has a range of lounge and dining areas, all beautifully decorated and homely. There is also a special Library corner, an activity room and a fabulous garden space. The lounge areas include rooms big enough for special events such as: a panto put on last Christmas; drumming workshop that go down a treat and special entertainment nights with two “singing sisters”. The sisters are called “Ice and a Slice” and come dressed in outfits from the 40’s and 50’s, including RAF uniforms and even old “char woman” outfits (if you don’t know what a char woman is, ask your parents!)

One of the things that make Castle Hill really special is their ability to bring the outside world to the home and the residents to the outside world. I am told of reminiscence sessions which uses artefacts brought in by the fabulous curators of the local Bodmin Town Museum. Then there is the special “bag of books” delivered by the local Library to suit the taste of individual residents. All this (and more) is led by the home’s wonderful activity co-ordinator, Karen Thomas. After a career as a micro-biologist, Karen has decided to bring her considerable talents to Castle Hill. She tells me of the big projects, but also the little, personalised things, like taking a frail gentleman back to his local pub. 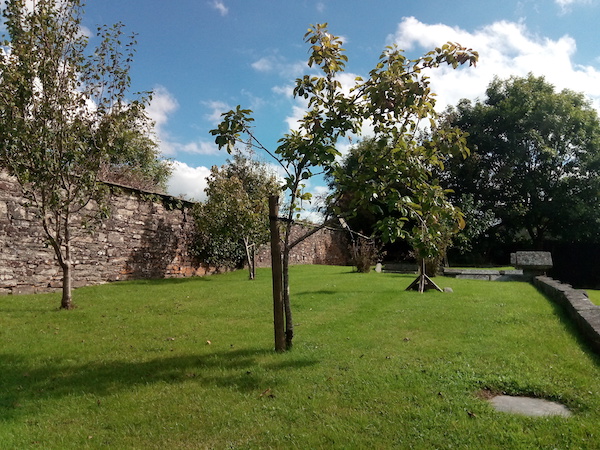 “It’s what he wanted to do. Since coming here he missed his local and all the characters and stories there, so we have taken him back and he has a great time.”

The personalised touch and focus on the residents past seems a theme in all activities. The film for the Home’s movie nights is selected by residents based on a particular film star of yesteryear. Karen tells me about the staff making great efforts to get details of resident’s past’s to create Life Story books. She shows me folders of photos and other material to prompt their memories. She talks about fascinating sessions where the residents take over the conversation and staff listen to talk about times before they were born.

The next big project, Karen tells me, is to get a beach into the Home. Yes, a beach! You see, being in Cornwall, most of the residents have lived by or accessed the sea for most of their lives. Now they do have trips to beaches, but Karen thought that she could recreate a beach scene in a corner of the garden. Plans are well under way and, as ever the local community has been enlisted to assist. The Harbour Commission are on the lookout for the sand, there are plans to get the authentic Marram Grass to plant and the scene shall be framed by a mural and real beach huts and have a small seam running though so people can get their feet wet. I tell Karen about Highcroft Hospital in Birmingham who, some years ago, organised a “beach holiday” for their patients. (Which reminds me – I must put them in touch with each other). If Karen is reading this – we want updates and pics!

Karen also tells me that the residents have their own Residents Council, which is chaired by Jim Beddin. I meet Jim in private and he is a remarkable man. He tells me he moved to the home with his wife, Dorothy to be nearer their son.  The Home adapted two bedrooms so the couple could have a shared bedroom and a sitting room and, when Dorothy died, Jim was able to stay on in their bedroom. Dorothy’s picture is on the wall as we talk. Jim also tells me about the Council and it is obvious he is a perfect chair, having worked in business before his retirement and having the skill and diplomacy needed for the job. He is truly remarkable – humble, dignified and intelligent – and it is only after we have had our chat that Karen tells me he was a fighter pilot in the war.

What about animals, I hear you ask. Well, where do you want me to start? The owners of the Home, Debbie and Tom, have a good natured Alsatian called Bugsy who is lopping around the place when I visit. Sweet natured and fun, Bugsy is gorgeous. There is also a PAT dog called Shane and visits from a PAT Shetland pony called Crackerjack (what a brilliant name for a pony!). There was even a Donkey at the Christmas Panto. I am told the Donkey was perfectly behaved, but Crackerjack has been known to leave little unwanted presents. I commiserate with the Housekeeper, Sarah, thinking this might just put her off having animals visit. Not a bit of it – in fact Sarah is so pro-animal that she brings her pet cockatoo into the home for residents who like birds. Finally, there is a cat, and her kitten, who live with a staff member in an adjoining flat, but who can be often found curled up asleep on a resident’s lap. 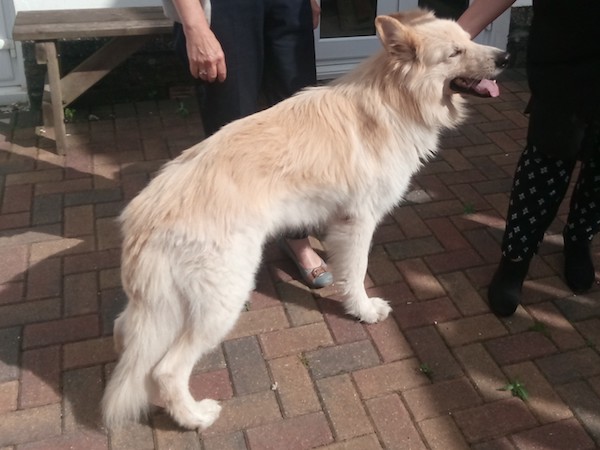 Look, Star Wards people, I could go on and on – but I won’t. We happily gave the Home and the fantastic staff and residents a Full Monty because they are exceptional. I can’t thank them enough for a wonderful experience.

Of course, this means we now have our first ever “Star Home” – and I wonder how many more there are out there? We might just have to work with Michaela and her team to develop Star Wards for Care Homes. Now that’s an idea! 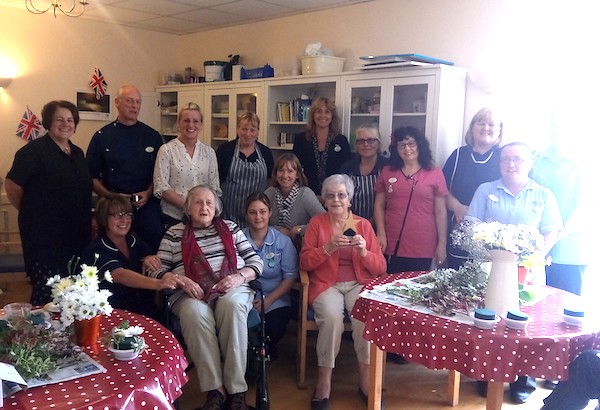