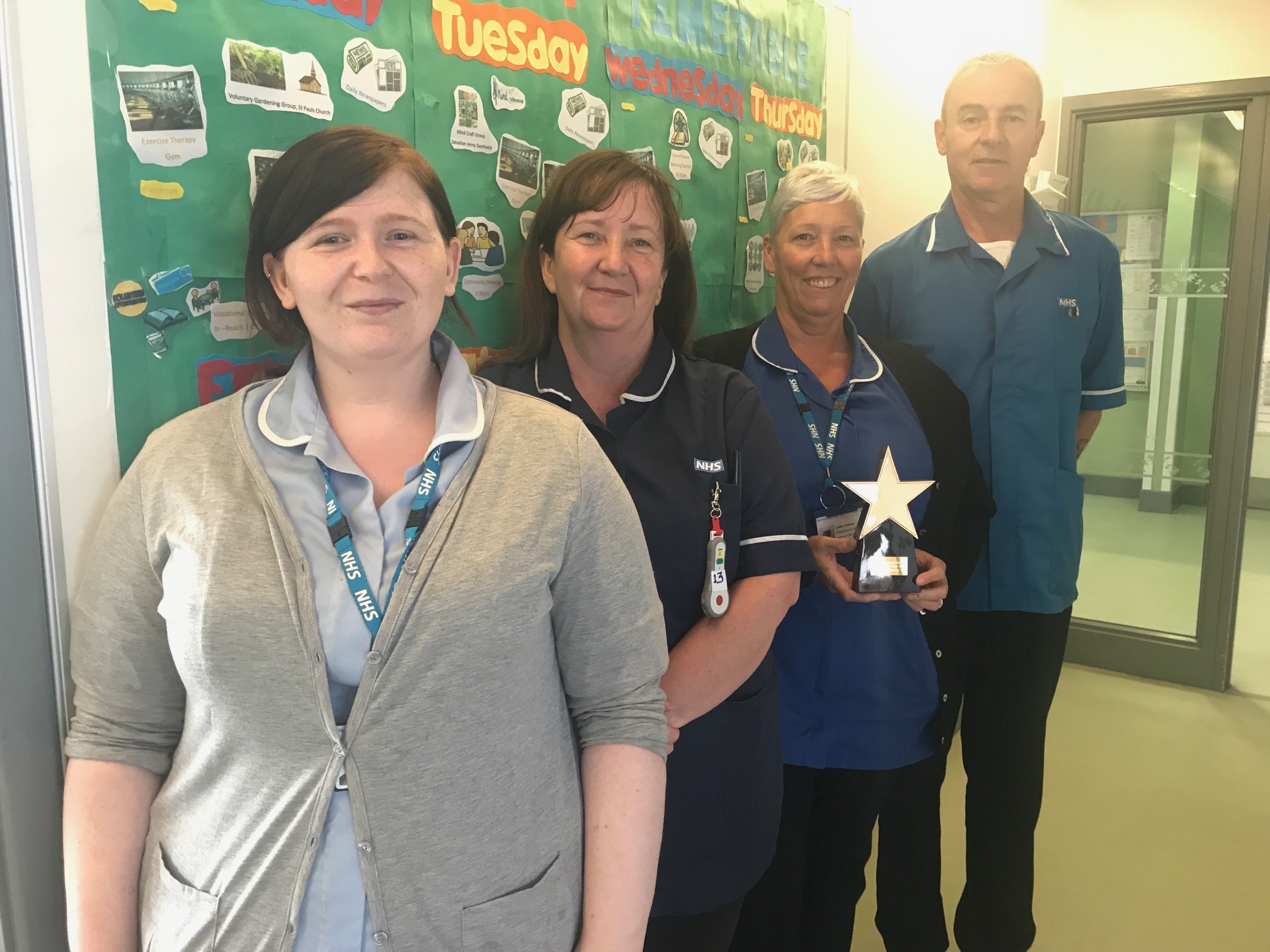 Congratulations Tracy Kerry and team at Clearbrook ward for achieving the Full Monty!

Back in April 2016 when they first embarked on their Star Wards journey, Clearbrook had many of the 75 ideas already in place and a couple which were partially achieved. It has taken them since April 2016, which was when they first carried out their benchmarking, to introduce the necessary enhancements.

Clearbrook is a specialist rehabilitation and recovery ward based at Hopewood Park in Gosforth, Newcastle upon Tyne. It has 18 inpatient beds for women with highly complex mental health needs and challenging behaviours who require intensive rehabilitation over a short to medium term. The ward is part of Northumberland, Tyne and Wear NHS Foundation Trust.

According to Clearbrook’s ward manager, Tracy, one of the best aspects of working through the ideas was the opportunity to look at some of the areas where they were already doing well. This had a brilliant influence on staff and was a real boost, she said:

“It’s not often that we focus on the good things that we’re doing. But when we did, it was a real motivator for us all. Staff endeavoured to improve things for our inpatients by working hard to introduce the Star Ward ideas. It was a case of that age old feeling that it feels good to be valued. The process of benchmarking and action planning was the proof that we were doing this and heading in the right direction.”

Clearbrook’s patients expressed that their experience of the ward had improved greatly. They had a more positive outlook through the introduction and development of the ward’s Star Wards project. They felt that their stay in hospital was a much more bearable experience.

Service user feedback and involvement in the project was key to Clearbrook’s success. During the project, it was highlighted that more activity needed to be put in place on Thursday evenings. The team listened and introduced an Activity Worker who soon introduced more meaningful, constructive and fun things to do at this time. This has truly enhanced the experience of the ward, said Tracy:

“It’s wonderful to see a large group of patients visible in the dining room every Thursday doing various activities and they are all very proud of the work they produce.”

The team were particularly proud of the various events that are now held at a local church, many of which patients helped with organising. These included: coffee mornings, dog walks (‘Ryhope Ramble’), as well as the theatre nights that have proved a huge success. Here’s Tracy again:

“These new activities have helped members of the surrounding community to understand mental health more therefore reducing stigma. It’s also lovely to see our John Lawlor, our Chief Executive, coming along to the ‘Ryhope Ramble’ with his wife and dog.”

Tracy and team were happily surprised that patients noticed and appreciated some of what the team felt were the “smaller” changes. They were equally heartened by the incredibly enthusiastic support from patients throughout the improvement process. I asked Tracy what advice she would give to other wards who are working on introducing the 75:

“Go for it! It’s a very rewarding process for all and it feels humbling to really make a big and very positive difference to patients by looking at various aspects.”